During the Japanese occupation of Korea in the 1930s, independence fighters wage war against the regime. However complicating matters significantly are the native Koreans who offer support to the invaders, turning traitor for wealth and power. One such turncoat, Kang In-gook (Lee Kyeong-yeong), is selected as the next assassination target with sniper Ahn Ok-yoon (Jeon Ji-hyeon), bruiser ‘Big Gun’ (Jo Jin-woong) and explosives expert Deok-sam (Choi Deok-moon) recruited for the task by independence captain Yeom Seok-jin (Lee Jeong-jae). However unbeknownst to the trio, contract killers Hawaii Pistol (Ha Jeong-woo) and Old Man (Oh Dal-soo) have been hired to stop them before they can fulfil the mission. 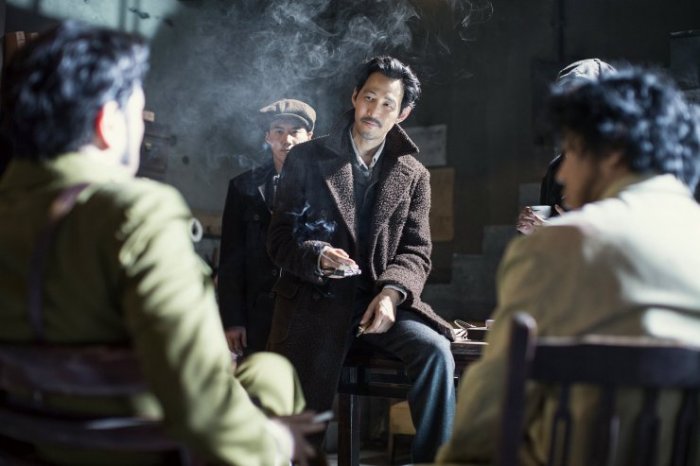 Liberation fighter Yeom gathers together a team for a daring task

Deserving credit for producing blockbuster fare in the Korean film industry – as well as for touching on the extremely sensitive issue of Japanese collaboration – director Choi Dong-hoon has once again crafted solid entertainment in the form of Assassination. While boasting a talented ensemble cast and and production values most other directors could only dream of, Choi’s latest still, as with prior film The Thieves, suffers from an overly-long and convoluted narrative that is tonally inconsistent. Alongside poor characterisation and lack of depth, Assassination is ultimately eye-candy cinema that is fun while it lasts but difficult to truly invest in.

Assassination begins in explosive fashion, as the fraught political period is brought to life through an adrenaline-inducing opening sequence that sees resistance fighter Yeom attempt to take out a high-profile Japanese target. It’s an engrossing and brilliantly executed introduction, with director Choi effortlessly generating thrills while setting up momentum for events to come. It also, ironically, contains much of what the film is about – glorious production values and camerawork, and talented performers wrangling with thread-bare characterisation.

The film’s reported $16 million budget is clearly visible in every frame as Assassination is truly a visual treat. The production, set and costume design are consistently impressive from beginning to end and it’s a genuine shame that the talented teams behind these areas have not been more widely celebrated for their work, for Assassination is worth watching largely for the visual finesse within. 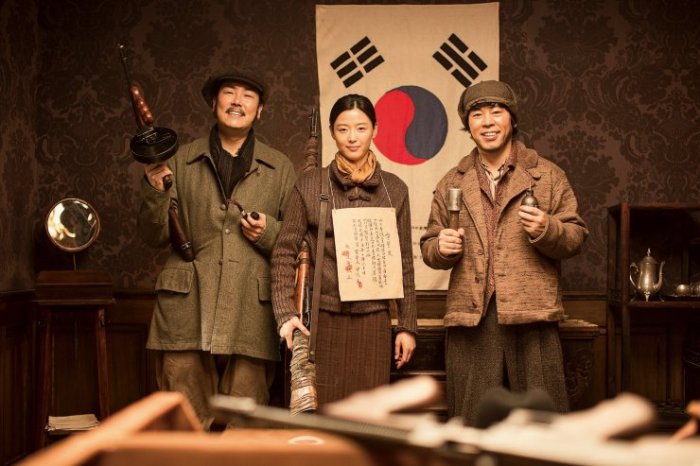 Trio Big Gun, Ok-yoon and Deok-sam are recruited to assassinate a conspirator

Director Choi has always managed to attract an impressive ensemble cast featuring some of the best talent within the industry for his projects, and Assassination is no exception. The manner in which such disparate characters are weaved together is arguably more organic than Choi’s previous work, and there is great entertainment value to be had during the film’s first half as alliances are forged and events set up. Yet at the half way mark the narrative takes a turn for the worse, veering into a wealth of convoluted and contrived plot points while taking initially promising characters and reducing them to one-dimensional stereotypes.

While the film’s stars perform their roles competently, unfortunately the characterisation issues effect them greatly. Jeon Ji-hyeon is promising as an empowered captain of the indolence who defies authority, only to be later reduced to her image in the film’s second act and never really shows her range. Ha Jeong-woo does what he can in the role of Hawaii Pistol though it quickly becomes apparent that both he and sidekick Oh Dal-soo never really belong in a story of Korean independence, seemingly remnants from a comedy-western that are shoe-horned in for light relief. Lee Jeong-jae performs the role of resistance leader Yeom with confident ease and is arguably the most charismatic presence, although the actor is in real danger of becoming typecast which undermines the tension.

While consistently entertaining, perhaps the biggest issue with Assassination is that the narrative itself is simply vapid. Director Choi bravely employs the extremely sensitive topic of Koreans collaborating with their oppressors during the era, but never explores nor takes a stance on the issue. It’s only in the film’s dying moments when one such traitor is allowed to twist history into portraying himself as a patriot that the film’s message takes a disturbingly conservative tone, and as such the underutilisation of a key feature of Korean history is sadly wasted.

One of the big tentpole films of 2015, blockbuster Assassination is an entertaining affair. Director Choi Dong-hoon once again proves his ability to command a talented ensemble cast and enormous budget. Top marks however instead go to the production crew who’ve crafted Assassination into a visual treat, making it possible to withstand the overly-long convoluted narrative and thread-bare characterisation that so often threatens to derail the proceedings.

For Korean cinema, 2019 was a year that saw the continuation of trends that have been readily apparent for the past several years - an increasing number of big blockbuster/commercially-orientated films with high production values, and the decreasing quality of creative, engaging, and memorable stories. That is not to say the talent has disappeared of... END_OF_DOCUMENT_TOKEN_TO_BE_REPLACED
2018 was quite a bizarre year for Korean cinema. The year began much like any other. The first few months of the year were typically dedicated to family-friendly fare. News of Korean films that were... END_OF_DOCUMENT_TOKEN_TO_BE_REPLACED
While the films released throughout any particular year are indicative of a country's identity, for Korean cinema in 2017 the exploration of political and social issues were especially revealing of the cultural shift that has... END_OF_DOCUMENT_TOKEN_TO_BE_REPLACED

Acclaimed actress Jeon Do-yeon is to be honoured at the 21st Bucheon International Fantastic Film Festival (BiFan) this year, in celebration of her 20 year career that began with Contact back in 1997. Entitled 'Contact, Jeon Do-yeon,' the special program is dedicated to the revered actress and will feature highlights from her incredible filmography, including Secret Sunshine... END_OF_DOCUMENT_TOKEN_TO_BE_REPLACED
Director Kim Jong-Kwan is well-known to fans of independent Korean cinema. A graduate of the Seoul Institute of the Arts, his short film How to Operate a Polaroid... END_OF_DOCUMENT_TOKEN_TO_BE_REPLACED
We are just one week away from the start of the 2nd Korea International Expat Film Festival (KIXFF).  Festival director Kevin Lambert took some time from his busy schedule to answer questions about the festival which... END_OF_DOCUMENT_TOKEN_TO_BE_REPLACED

Having a film selected to premiere at the Cannes Film Festival is an incredible achievement - having two is quite extraordinary. Yet that is precisely what director Hong Sang-soo has done, as The Day After (그 후) and Claire's Camera (클레어의 카메라) are due to be screened, with both films starring actress Kim Min-hee. Selected for the 'In Competition'... END_OF_DOCUMENT_TOKEN_TO_BE_REPLACED
The Villainess (악녀) has received an explosive trailer in the run-up to its debut at the Cannes Film Festival on May 21st. Appearing in the 'Out of Competition - Midnight Projections' program, writer/director Jung Byung-gil's latest... END_OF_DOCUMENT_TOKEN_TO_BE_REPLACED
Director Bong Joon-ho's Okja (옥자) is almost upon us. The highly anticipated science-fiction/drama is set to premiere In Competition at the Cannes Int. Film Festival on May 19th, before appearing on Korean cinema screens around June... END_OF_DOCUMENT_TOKEN_TO_BE_REPLACED
Join 143 other followers