At a private academy in the city, cleaning lady Sun (Jang Sun (장선) is reprimanded by her boss for inappropriate sexual conduct with other employees. Bizarrely however, she finds the situation humorous and continues with her work, conveying a psychological instability that worries her colleagues. Also at the academy is teacher Mr. Kim (Kim Kwon-hoo (김권후), whose eccentric behaviour also baffles those around him. Unable to communicate their distresses with the world, Sun and Mr. Kim decide to take a trip together, but can they truly express themselves or simply live with lies?

After beginning in gripping fashion, director Lee Seung-won’s debut Communication & Lies enters a downward spiral through an incredibly confused narrative structure and misogyny masquerading as psychological insight. While the film does well in portraying how those suffering from psychological instability go largely ignored in contemporary Korean society, the story fails to build empathy with the protagonists by focusing primarily on their hysteria.

Communication and Lies begins with a captivating eight minute long take, as Sun is scolded by her manager for her recent conduct. It’s a brilliantly written scene, with information gently teased out through the conversation that slowly reveals the reason for Sun’s admonishment, while her truthfulness and odd reactions highlight her instability through dark humour. The manner in which the discourse unfolds is gripping, particularly for those familiar with Korean culture who expect the conversation to play out in a certain fashion, with the scene wonderfully subverting cultural norms. 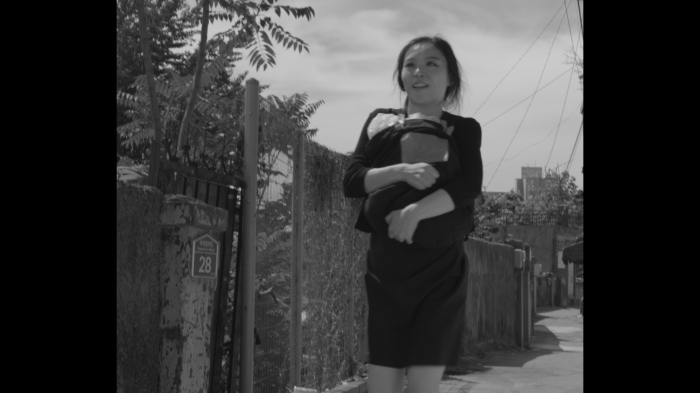 Sun has difficulty with communication and lies due to psychological instability

Yet from such a fascinating opening the film dramatically loses momentum through a frustratingly haphazard narrative structure. The film shifts focus to introduce the less-interesting Mr. Kim and his eccentricities, while building his relationship with Sun towards their trip. Mr. Kim simply isn’t as compelling as his female counterpart, a fact which director Lee appears to be aware of hence the somewhat belated inclusion of flashbacks that dart back and forth through their timelines in a bid to generate mystery by slowly revealing the traumas that inspired their neuroses. It’s a noble but often confusing endeavour, as the story jumps to various points of the character’s lives in the past three years and attempts to address the origins of their mental illnesses, yet there isn’t significant enough depth to generate the required empathy. This is acutely the case with Mr. Lee whose tangent is rather bland, and the film would have benefited greatly from having Sun as the sole lead.

Furthermore, the exploration of Sun’s psychological instability is acutely misogynistic. As a result of personal trauma, Sun dehumanises herself with various sexual acts, yet there is no examination given as to why her illness has developed in this fashion and as such sequences that are intended as explore Sun’s tendency to sexually humiliate herself are often instead merely perverse male fantasies, with beatings, foul language, and orifice-fascination featuring at various points. The character has great potential that is unfortunately not realised throughout the film’s 103 minute running time, though actress Jang Sun performs the role capably.

In a city full of people, the plights of the mentally ill often go ignored

Though beginning in gripping fashion, director Lee Seung-won’s Communication & Lies loses impetus through a frustratingly haphazard and oft-confusing narrative structure. Though nobly attempting to allude to the origins of neuroses and the general ignorance within contemporary Korea, the film instead conforms to a misogynistic male fantasy masquerading as psychological insight.

For Korean cinema, 2019 was a year that saw the continuation of trends that have been readily apparent for the past several years - an increasing number of big blockbuster/commercially-orientated films with high production values, and the decreasing quality of creative, engaging, and memorable stories. That is not to say the talent has disappeared of... END_OF_DOCUMENT_TOKEN_TO_BE_REPLACED
2018 was quite a bizarre year for Korean cinema. The year began much like any other. The first few months of the year were typically dedicated to family-friendly fare. News of Korean films that were... END_OF_DOCUMENT_TOKEN_TO_BE_REPLACED
While the films released throughout any particular year are indicative of a country's identity, for Korean cinema in 2017 the exploration of political and social issues were especially revealing of the cultural shift that has... END_OF_DOCUMENT_TOKEN_TO_BE_REPLACED

Acclaimed actress Jeon Do-yeon is to be honoured at the 21st Bucheon International Fantastic Film Festival (BiFan) this year, in celebration of her 20 year career that began with Contact back in 1997. Entitled 'Contact, Jeon Do-yeon,' the special program is dedicated to the revered actress and will feature highlights from her incredible filmography, including Secret Sunshine... END_OF_DOCUMENT_TOKEN_TO_BE_REPLACED
Director Kim Jong-Kwan is well-known to fans of independent Korean cinema. A graduate of the Seoul Institute of the Arts, his short film How to Operate a Polaroid... END_OF_DOCUMENT_TOKEN_TO_BE_REPLACED
We are just one week away from the start of the 2nd Korea International Expat Film Festival (KIXFF).  Festival director Kevin Lambert took some time from his busy schedule to answer questions about the festival which... END_OF_DOCUMENT_TOKEN_TO_BE_REPLACED

Having a film selected to premiere at the Cannes Film Festival is an incredible achievement - having two is quite extraordinary. Yet that is precisely what director Hong Sang-soo has done, as The Day After (그 후) and Claire's Camera (클레어의 카메라) are due to be screened, with both films starring actress Kim Min-hee. Selected for the 'In Competition'... END_OF_DOCUMENT_TOKEN_TO_BE_REPLACED
The Villainess (악녀) has received an explosive trailer in the run-up to its debut at the Cannes Film Festival on May 21st. Appearing in the 'Out of Competition - Midnight Projections' program, writer/director Jung Byung-gil's latest... END_OF_DOCUMENT_TOKEN_TO_BE_REPLACED
Director Bong Joon-ho's Okja (옥자) is almost upon us. The highly anticipated science-fiction/drama is set to premiere In Competition at the Cannes Int. Film Festival on May 19th, before appearing on Korean cinema screens around June... END_OF_DOCUMENT_TOKEN_TO_BE_REPLACED