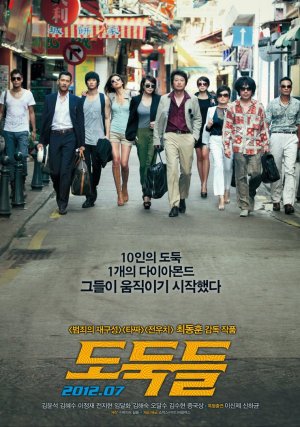 Following a spectacularly daring art heist, criminal Popie (Lee Jeong-jae (이정재) and his band of thieves – Yenicall (Jeon Ji-hyeon (전지현), Jampano (Kim Soo-hyeon (김수현) and Chewing Gum (Kim Hae-sook (김해숙) – have too much heat on them to operate in Korea for the foreseeable future. Yet as luck would have it, a job offer in Macau arises from master thief and former associate Macao Park (Kim Yoon-seok (김윤석). Joined by safecracker Pepsee (Kim Hye-soo (김혜수), the gang join forces with a team of Chinese bandits to steal a $20 million diamond named  ‘The Tear of the Sun.’ Yet Macao’s plans to sell the diamond back to owner and ruthless mobster Wei Hong, as well as the alternative agendas of everyone within the team, results in a crime caper that goes anything but smoothly. 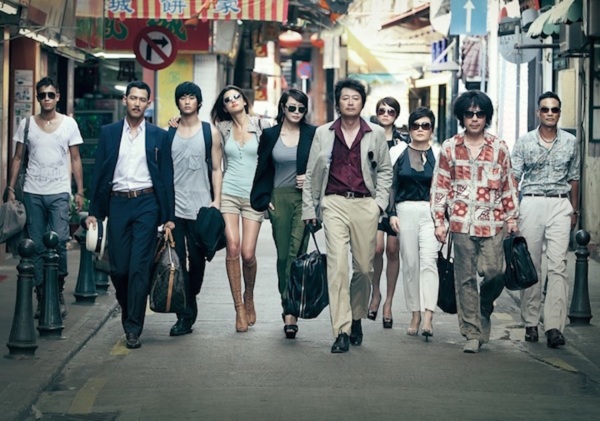 When The Thieves was released back in the summer of 2012, it rapidly became a cinematic phenomenon. Within its opening weekend the film had grossed over 2 million admissions; on its ninth day, The Thieves became the most attended Korean film of the 2012 before beating that record four days later by becoming the top selling film of the year. 22 days after release the crime caper joined the elite ’10 million admissions’ club, before passing 12 million 11 days later. At the end of its theatrical run The Thieves had taken almost $83 million at the Korean box office, as well as becoming the second most attended film in Korean history at the time. The success and popularity were unprecedented, yet that aside, is it any good?

The Thieves is a noble effort at producing an entertaining all-star international crime caper. Writer/director Choi Dong-hoon has established himself as a success within the genre for quite some time with The Big Swindle and Tazza: The High Rollers, however The Thieves marks an altogether different, more Hollywood-esque, approach for the filmmaker and it’s one that has paid enormous dividends to his career. The pleasure of witnessing some of the Korean industry’s biggest stars interacting and attempting to outwit each other in exotic locations is particularly enjoyable, often – and especially the case for 12 million domestic viewers – taking attention away from the frustratingly convoluted narrative. Juggling such an inordinate amount of actors is an impressive feat and director Choi does his very best to give every character a history and motivation, some of which works well amongst an array of superfluous tangents, and while occasionally entertaining it also serves to create periods where precious little actually occurs as well as to make The Thieves acutely overly long.

Safecracker Pepse and thief Popie make a play for the diamond

One of the reasons attributed to the success of The Thieves is the presence of Jeon Ji-hyeon and her flirtatious relationship with heartthrob Kim Soo-hyeon (indeed, their chemistry together later translated into incredibly lucrative TV drama You Came From the Stars). While the crime caper is a great comeback vehicle for Jeon, who has clearly been selected to bring sex appeal both on and off screen, her and Kim Soo-hyeon appear rather sporadically throughout. Instead, it is Kim Hye-soo who steals the limelight in terms of both beauty and allure as well as in forming the emotional centre of the film. Her appearances within the film are magnetic and amongst all the betrayals and double-dealings that arise, her steadfast character provides a stabilising core that is sorely needed. Ultimately however the simply excessive amount of characters weighs the story down, and The Thieves would have benefited from jettisoning several of them – particularly the Chinese criminals, who bring little to the story – and developing the core team instead.

Yet The Thieves really hits its stride in the wonderfully kinetic final act, where all the various parties involved in the diamond heist collide with extreme effect. The acrobatic wire-work battles and blazing stand-offs with criminals brandishing automatic weapons are impressive, and are consistently highly entertaining, silly, fun. It’s pure popcorn cinema, and director Choi does an excellent job in constructing an enjoyable finale while still keeping to the spirit of Korean crime caper.

The Thieves is an entertaining crime caper, and a real pleasure to witness some of the best stars in Korea go head-to-head in ‘winner take all’ race to the finish. Director Choi Dong-hoon juggles the excessive cast well throughout the convoluted narrative, yet tedium does occasionally appear during the overly long running time. The Thieves is pure popcorn cinema, and consistently entertaining, silly, fun.

For Korean cinema, 2019 was a year that saw the continuation of trends that have been readily apparent for the past several years - an increasing number of big blockbuster/commercially-orientated films with high production values, and the decreasing quality of creative, engaging, and memorable stories. That is not to say the talent has disappeared of... END_OF_DOCUMENT_TOKEN_TO_BE_REPLACED
2018 was quite a bizarre year for Korean cinema. The year began much like any other. The first few months of the year were typically dedicated to family-friendly fare. News of Korean films that were... END_OF_DOCUMENT_TOKEN_TO_BE_REPLACED
While the films released throughout any particular year are indicative of a country's identity, for Korean cinema in 2017 the exploration of political and social issues were especially revealing of the cultural shift that has... END_OF_DOCUMENT_TOKEN_TO_BE_REPLACED

Acclaimed actress Jeon Do-yeon is to be honoured at the 21st Bucheon International Fantastic Film Festival (BiFan) this year, in celebration of her 20 year career that began with Contact back in 1997. Entitled 'Contact, Jeon Do-yeon,' the special program is dedicated to the revered actress and will feature highlights from her incredible filmography, including Secret Sunshine... END_OF_DOCUMENT_TOKEN_TO_BE_REPLACED
Director Kim Jong-Kwan is well-known to fans of independent Korean cinema. A graduate of the Seoul Institute of the Arts, his short film How to Operate a Polaroid... END_OF_DOCUMENT_TOKEN_TO_BE_REPLACED
We are just one week away from the start of the 2nd Korea International Expat Film Festival (KIXFF).  Festival director Kevin Lambert took some time from his busy schedule to answer questions about the festival which... END_OF_DOCUMENT_TOKEN_TO_BE_REPLACED

Having a film selected to premiere at the Cannes Film Festival is an incredible achievement - having two is quite extraordinary. Yet that is precisely what director Hong Sang-soo has done, as The Day After (그 후) and Claire's Camera (클레어의 카메라) are due to be screened, with both films starring actress Kim Min-hee. Selected for the 'In Competition'... END_OF_DOCUMENT_TOKEN_TO_BE_REPLACED
The Villainess (악녀) has received an explosive trailer in the run-up to its debut at the Cannes Film Festival on May 21st. Appearing in the 'Out of Competition - Midnight Projections' program, writer/director Jung Byung-gil's latest... END_OF_DOCUMENT_TOKEN_TO_BE_REPLACED
Director Bong Joon-ho's Okja (옥자) is almost upon us. The highly anticipated science-fiction/drama is set to premiere In Competition at the Cannes Int. Film Festival on May 19th, before appearing on Korean cinema screens around June... END_OF_DOCUMENT_TOKEN_TO_BE_REPLACED
Join 143 other subscribers