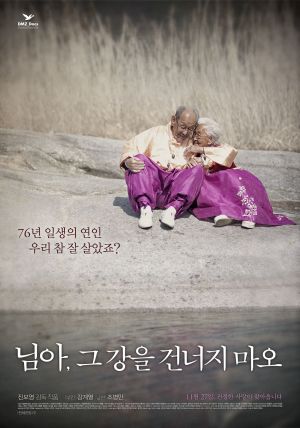 At the end of 2014, Korean cinema witnessed an astonishing feat – documentary My Love, Don’t Cross That River (님아, 그 강을 건너지 마오) shattered the record to become the most successful Korean independent film in history. The surprise came largely from the initial humble opening. Premiering at the DMZ Documentary Film Festival in September, the film was finally released on November 27th against Hollywood heavyweights Interstellar, The Hunger Games: Mocking Jay Part 1 and Fury on a paltry 186 screens. Yet the fervent positive word of mouth that quickly surrounded My Love generated interest on such a scale that the documentary acquired a place in the top ten for the entire winter period, culminating in an incredible haul of over 4.7 million admissions and 34.3 million won. Compared to previous record holder Old Partner’s 17.5 million won take, the magnitude of My Love’s success is impossible to ignore.

My Love, Don’t Cross That River is an incredibly charismatic documentary by director Jin Mo-young (진모영), with it’s deceptively simple structure and strong emotional resonance clearly the reasoning behind how the film struck a chord with audiences during it’s impressive theatrical run. Yet while the documentary is sweet, poignant, and in many ways acutely romantic, My Love’s success is also somewhat puzzling.

My Love affectionately depicts the final years of the relationship between 98 year old Jo Byeong-nam and 89 year old Kang Gye-yeol who, after 76 years of marriage, still behave as newlyweds. When the couple go out, they always sport matching hanbok. When chores are undertaken, they jokingly play tricks on each other. When they settle down for the night, they fall asleep holding hands. The elderly couple are unspeakably endearing and are a real joy to watch as they cheerfully continue their countryside existence, despite the hardships old age brings. Their devotion is palpable, displayed through loving glances, body language and cute moments that consistently prove to be heartwarming. Combined with the photogenic backdrop of the picturesque countryside, My Love is visually as well as emotionally stimulating and is quite the moving tale.

The endearing couple play with flowers in Spring

Amongst such cheerful scenes however is the occasional sense of contrivance, which chiefly appears due to the camerawork. Byeong-man is a loveable rascal and likes to play tricks on his wife, yet as the camera quickly tracks around the couple to capture his pranks, as well as rather obvious editing cuts that capture that action from another angle, it feels as if the couple are being asked to perform for the camera which tends to undermine the purpose of the documentary. Luckily such moments aren’t frequent, and the film quickly corrects itself once the focus shifts back to more natural, authentic situations.

The simplicity of My Love is very appealing as the daily lives and the indomitable spirits of the elderly couple are documented, yet there is also a enormous amount of unexplored potential just begging to be uncovered, which unfortunately never achieves fruition. Aside from two wonderfully illuminating conversations in which Gye-yeol discusses how she and Byeong-man first met and married, as well as the amount of children they conceived, the film doesn’t really delve into their undoubtedly fascinating history to give audiences a sense of who they are. Hints to the tremendous amount of experience the couple have endured are alluded to at various junctures, however director Jin instead chooses to focus on the here and now which results in a romantic, poignant, emotionally resonating tale, albeit one that could have benefited from greater depth. 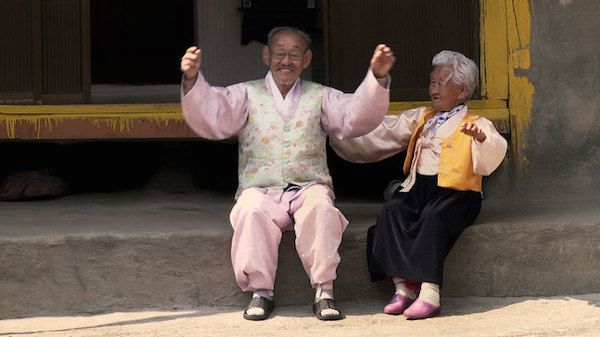 My Love, Don’t Cross That River is a record-breaking triumph for the independent sector as the most successful non-commercial film in Korean cinema history. Director Jin Mo-young’s endearing documentary about the charismatic relationship of elderly couple Byeong-man and Gye-yeol is wonderfully heartwarming and romantic as they act like newlyweds despite their ages. However My Love‘s occasional contrivances and unexplored potential stop audiences from truly knowing the couple, resulting in a simple yet emotionally resonant tale.

For Korean cinema, 2019 was a year that saw the continuation of trends that have been readily apparent for the past several years - an increasing number of big blockbuster/commercially-orientated films with high production values, and the decreasing quality of creative, engaging, and memorable stories. That is not to say the talent has disappeared of... END_OF_DOCUMENT_TOKEN_TO_BE_REPLACED
2018 was quite a bizarre year for Korean cinema. The year began much like any other. The first few months of the year were typically dedicated to family-friendly fare. News of Korean films that were... END_OF_DOCUMENT_TOKEN_TO_BE_REPLACED
While the films released throughout any particular year are indicative of a country's identity, for Korean cinema in 2017 the exploration of political and social issues were especially revealing of the cultural shift that has... END_OF_DOCUMENT_TOKEN_TO_BE_REPLACED

Acclaimed actress Jeon Do-yeon is to be honoured at the 21st Bucheon International Fantastic Film Festival (BiFan) this year, in celebration of her 20 year career that began with Contact back in 1997. Entitled 'Contact, Jeon Do-yeon,' the special program is dedicated to the revered actress and will feature highlights from her incredible filmography, including Secret Sunshine... END_OF_DOCUMENT_TOKEN_TO_BE_REPLACED
Director Kim Jong-Kwan is well-known to fans of independent Korean cinema. A graduate of the Seoul Institute of the Arts, his short film How to Operate a Polaroid... END_OF_DOCUMENT_TOKEN_TO_BE_REPLACED
We are just one week away from the start of the 2nd Korea International Expat Film Festival (KIXFF).  Festival director Kevin Lambert took some time from his busy schedule to answer questions about the festival which... END_OF_DOCUMENT_TOKEN_TO_BE_REPLACED

Having a film selected to premiere at the Cannes Film Festival is an incredible achievement - having two is quite extraordinary. Yet that is precisely what director Hong Sang-soo has done, as The Day After (그 후) and Claire's Camera (클레어의 카메라) are due to be screened, with both films starring actress Kim Min-hee. Selected for the 'In Competition'... END_OF_DOCUMENT_TOKEN_TO_BE_REPLACED
The Villainess (악녀) has received an explosive trailer in the run-up to its debut at the Cannes Film Festival on May 21st. Appearing in the 'Out of Competition - Midnight Projections' program, writer/director Jung Byung-gil's latest... END_OF_DOCUMENT_TOKEN_TO_BE_REPLACED
Director Bong Joon-ho's Okja (옥자) is almost upon us. The highly anticipated science-fiction/drama is set to premiere In Competition at the Cannes Int. Film Festival on May 19th, before appearing on Korean cinema screens around June... END_OF_DOCUMENT_TOKEN_TO_BE_REPLACED
Join 143 other followers