With only 3 months more service until she becomes a regular employee, supermarket cashier Seon-hee (Yeom Jeong-ah (염정아) works diligently for the position that will enable her to provide greater stability for her family. Despite the difficulties of raising wayward teenage son Tae-yeong (Do Kyeong-soo (도경수) and a young daughter (Kim Soo-an (김수안) alone, Seon-hee strives to make ends meet for them all. Yet when the supermarket officials decide to layoff all the workers in favor of cheaper labor, the mostly female staff – many of whom have worked with the company for years – are outraged. Led by fellow cashier Hye-mi (Moon Jeong-hee (문정희) and cleaner Soon-rye (Kim Yeong-ae (김영애), the women begin to unionize and issue demands for reinstatement. However when their efforts are ultimately ignored, the women decide that more drastic strike action is necessary for their voices to be heard.

Seon-hee witnesses abuse at work, yet her desire for job stability keeps her silent

Based on a true story, director Boo Ji-young’s (부지영) Cart (카트) premiered to high acclaim at the Toronto International Film Festival, as well as later back home in native Korea at Busan. The drama is an incredibly impressive exploration of the issues plaguing the temporary workforce in contemporary Korea. From the very moment Cart begins director Boo effectively portrays the grueling monotony of menial labor, employing a brilliantly washed out colour palette in conjunction with fluid camerawork that depicts workers performing machine-like tasks under the watchful eyes of aggressive management, evoking the same sensibilities as Charlie Chaplin’s classic Modern Times. Rather than individuals, the workers are consistently framed as cogs in a machine hurriedly operating the factory-esque supermarket whilst robotically repeating phrases such as, “We love you, customer!” Director Boo wonderfully juxtaposes such hard work and empty slogans with the awful humiliations dealt by the customers and executives, while the workers themselves tolerate such human rights abuses simply in order to keep their jobs.

The contrast between such scenes and the representation of the characters personal lives offer a powerful, provocative glimpse at class and gender warfare as well as social injustice in modern Korea. As the vast majority of the workers are underprivileged women, the film depicts the daily struggles of the female workforce as they endure abusive employment in order to desperately stave off poverty, emphasising an array of feminist issues with potent insight. Director Boo has crafted an empowering social rights drama, one which is a true rarity in both current Korean and international cinema. The range of characters within the film, each with their own dilemmas, poignantly capture the challenges facing modern women in society. While Seon-hee and Hye-mi struggle to raise their children alone, Soon-rye exposes the plight of the elderly, while the inclusion of married protagonists as well as disaffected graduate Mi-jin (Cheon Woo-hee (천우희) convey the breadth and scale of discourses effecting contemporary women. Cart is a truly refreshing alternative to male-centered narratives, one that unequivocally portrays working class women as heroines in their own right. 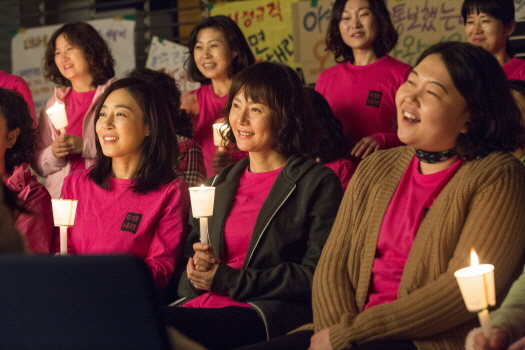 The power of Cart lies in the conflict between the mostly female workers and the male executives, as the unfair dismissals result in unionization, and the ignorance of which in turn spurs strike action. Director Boo structures the escalation of hostilities between both sides with skill, as the workers who stage peaceful protests with colourful clothes and slogans are confronted by the dark bullying tactics of the company. In so blatantly portraying the corruption and underhand manner of the corporation, director Boo has produced a challenging and provocative film that will undoubtedly ruffle feathers amongst the conservative upper classes, who are depicted offering bribes, employing gangsters, and hurting innocents in the bid to continue profits and to save face. Yet director Boo also implicates government agencies in the scandal, particularly the police force and their unnecessary brutality, as the women peacefully demonstrate against injustice, making Cart not only an insightful film but a courageous one too.

Cart does however suffer from a case of over ambition as too many protagonists feature, which ultimately makes it difficult to invest in all of the narrative threads that arise. All the characters certainly add a perspective on the discourses through the film, yet as there are so many tangents it’s difficult to invest in every one. Screen time is mostly ascribed to Seon-hee and her family, and an impressive contrast is made between her and her difficult son Tae-yeong, implying the conditioning of the populace as automatons as one that begins from a young age. However Tae-young’s story line, in which he becomes attached to prospective girlfriend Soo-kyeong (Ji Woo (지우), is a little trite and appears to be a device to attract teenage audiences. Scenes such as these, and others that feature the quite cheesy musical score, sometimes threaten to put Cart in TV drama territory, yet director Boo never lets the story stagnate and consistently keeps the drama moving apace.

As tensions escalate, Seon-hee and Hye-mi fight back against their affluent male abusers

Cart is moving, provocative glimpse at class and gender warfare as well as social injustice in modern Korea. In depicting the unfair working conditions and the incredibly strong women attempting to stave off poverty, director Boo Ji-young has crafted an empowering social rights drama, one that examines the status of human rights and feminist issues with insight and sincerity. A powerful film, Cart is a real rarity in both contemporary Korean and international cinema.

For Korean cinema, 2019 was a year that saw the continuation of trends that have been readily apparent for the past several years - an increasing number of big blockbuster/commercially-orientated films with high production values, and the decreasing quality of creative, engaging, and memorable stories. That is not to say the talent has disappeared of... END_OF_DOCUMENT_TOKEN_TO_BE_REPLACED
2018 was quite a bizarre year for Korean cinema. The year began much like any other. The first few months of the year were typically dedicated to family-friendly fare. News of Korean films that were... END_OF_DOCUMENT_TOKEN_TO_BE_REPLACED
While the films released throughout any particular year are indicative of a country's identity, for Korean cinema in 2017 the exploration of political and social issues were especially revealing of the cultural shift that has... END_OF_DOCUMENT_TOKEN_TO_BE_REPLACED

Acclaimed actress Jeon Do-yeon is to be honoured at the 21st Bucheon International Fantastic Film Festival (BiFan) this year, in celebration of her 20 year career that began with Contact back in 1997. Entitled 'Contact, Jeon Do-yeon,' the special program is dedicated to the revered actress and will feature highlights from her incredible filmography, including Secret Sunshine... END_OF_DOCUMENT_TOKEN_TO_BE_REPLACED
Director Kim Jong-Kwan is well-known to fans of independent Korean cinema. A graduate of the Seoul Institute of the Arts, his short film How to Operate a Polaroid... END_OF_DOCUMENT_TOKEN_TO_BE_REPLACED
We are just one week away from the start of the 2nd Korea International Expat Film Festival (KIXFF).  Festival director Kevin Lambert took some time from his busy schedule to answer questions about the festival which... END_OF_DOCUMENT_TOKEN_TO_BE_REPLACED

Having a film selected to premiere at the Cannes Film Festival is an incredible achievement - having two is quite extraordinary. Yet that is precisely what director Hong Sang-soo has done, as The Day After (그 후) and Claire's Camera (클레어의 카메라) are due to be screened, with both films starring actress Kim Min-hee. Selected for the 'In Competition'... END_OF_DOCUMENT_TOKEN_TO_BE_REPLACED
The Villainess (악녀) has received an explosive trailer in the run-up to its debut at the Cannes Film Festival on May 21st. Appearing in the 'Out of Competition - Midnight Projections' program, writer/director Jung Byung-gil's latest... END_OF_DOCUMENT_TOKEN_TO_BE_REPLACED
Director Bong Joon-ho's Okja (옥자) is almost upon us. The highly anticipated science-fiction/drama is set to premiere In Competition at the Cannes Int. Film Festival on May 19th, before appearing on Korean cinema screens around June... END_OF_DOCUMENT_TOKEN_TO_BE_REPLACED
Join 143 other followers