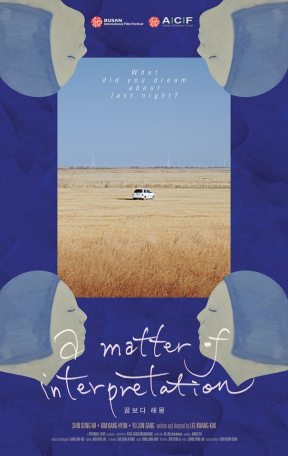 Frustrated that her acting career isn’t progressing in the manner she hoped, Yeon-shin (Shin Dong-mi (신동미) decides to quit the profession and walks out on her director. Her anger is such that she fights with old friends and in a moment of unbridled immaturity, breaks up with long term boyfriend Woo-yeon (Kim Kang-hyeon (김강현). Time passes and Yeon-shin, feeling sorry for herself, visits a hilltop to gather her thoughts where she encounters an unorthodox detective (Yu Joon-sang (유준상) with a talent for interpreting dreams. 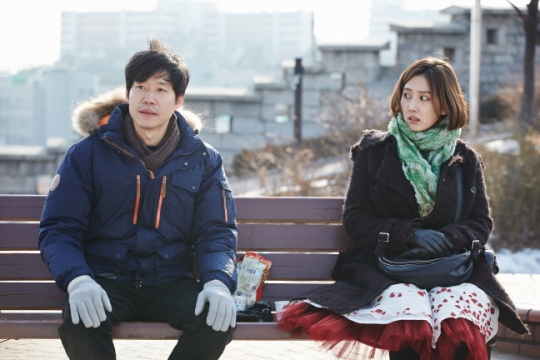 A Matter of Interpretation (꿈보다 해몽) is perhaps best described as a quirky, surreal comedy-drama with Hong Sang-soo-esque stylisation, which makes sense considering writer/director Lee Kwang-kuk (이광국) worked with the auteur as an assistant director on several of his films. Through the incorporation of witty conversations and humourous encounters however director Lee has made A Matter of Interpretation arguably more accessible for audiences, which should appease critics of Hong’s work.

His second feature following the acclaimed Romance Joe, director Lee’s A Matter of Interpretation is a highly enjoyable affair and one that rewards repeated viewings due to the nature of the narrative. The story chronicles the fraught lives and relationships of the central characters yet focuses primarily on how such issues present themselves through dreams, and watching the reenactments unfold is a consistently surreal and entertaining experience. Yet rather than a Freudian analysis, director Lee attempts to interrogate the notions of life and happiness within contemporary Korea through symbolism, touching on a range of social issues with wit and ingenuity in the dream-like spaces within the film. 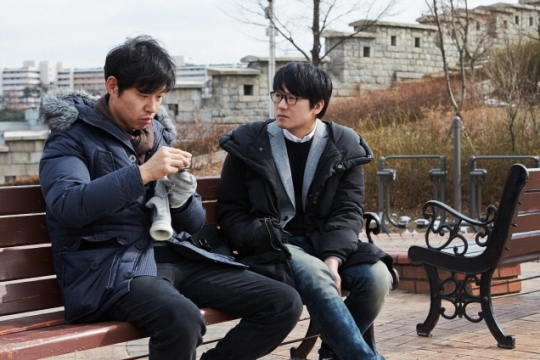 Central to the enjoyment are the fascinating assortment of characters, particularly the wonderful acting and comedic timing by lead actress Shin Dong-mi. Shin is superb as sassy frustrated performer Yeon-shin, with her sharp-tongued insults and bad-temper consistently funny as well revealing her own subconscious issues. She portrays Yeon-shin’s trajectory extremely well, which along with that of her boyfriend, form a genuine and insightful examination of couples who reach a certain period in their lives. Meanwhile frequent Hong Sang-soo collaborator Yu Joon-sang brings expert timing and a charismatic aloofness to the film as the detective. His delivery of dialogue, notably his dream interpretations, are engaging and humourous yet he also manages to convey a sense of tragedy to the character, adding complexity to a role that could have been bland in lesser hands.

Yet for all of the enjoyable and interesting moments throughout A Matter of Interpretation, the film suffers from an inconsistent tone and fragmented narrative that ultimately leads to a story that fades in and out of being compelling. Such issues arise when focus is directed away from Yeon-shin towards the detective’s and, to a lesser extent, Woo-yeon’s dreams and backstories. From the very beginning it is Yeon-shin who is the fascinating central character who has huge potential for growth, such is Shin Dong-mi’s performance, and in ascribing time to those around her Yeon-shin’s development becomes subsumed. That’s not to say that the cast are dull as they are consistently entertaining, however the fragmentation between the characters, the stories, and between reality and dreams itself results in a film that, while very enjoyable, lacks the potency it would have had through more engagement with Yeon-shin.

A Matter of Interpretation is a wonderfully quirky and highly enjoyable second feature from writer/director Lee Kwang-kuk. The influences from his mentor Hong Sang-soo are clearly apparent yet Lee infuses his film with an alternative sense of biting wit alongside comedic – and often somewhat surreal – socio-cultural insight. Actress Shin Dong-mi shines as central protagonist Yeon-shin, while Yu Joon-sang is wonderfully charismatic as the odd detective. The film does suffer due to the fragmented narrative and inconsistent tone, yet A Matter of Interpretation is an entertaining take on modern happiness.

For Korean cinema, 2019 was a year that saw the continuation of trends that have been readily apparent for the past several years - an increasing number of big blockbuster/commercially-orientated films with high production values, and the decreasing quality of creative, engaging, and memorable stories. That is not to say the talent has disappeared of... END_OF_DOCUMENT_TOKEN_TO_BE_REPLACED
2018 was quite a bizarre year for Korean cinema. The year began much like any other. The first few months of the year were typically dedicated to family-friendly fare. News of Korean films that were... END_OF_DOCUMENT_TOKEN_TO_BE_REPLACED
While the films released throughout any particular year are indicative of a country's identity, for Korean cinema in 2017 the exploration of political and social issues were especially revealing of the cultural shift that has... END_OF_DOCUMENT_TOKEN_TO_BE_REPLACED

Acclaimed actress Jeon Do-yeon is to be honoured at the 21st Bucheon International Fantastic Film Festival (BiFan) this year, in celebration of her 20 year career that began with Contact back in 1997. Entitled 'Contact, Jeon Do-yeon,' the special program is dedicated to the revered actress and will feature highlights from her incredible filmography, including Secret Sunshine... END_OF_DOCUMENT_TOKEN_TO_BE_REPLACED
Director Kim Jong-Kwan is well-known to fans of independent Korean cinema. A graduate of the Seoul Institute of the Arts, his short film How to Operate a Polaroid... END_OF_DOCUMENT_TOKEN_TO_BE_REPLACED
We are just one week away from the start of the 2nd Korea International Expat Film Festival (KIXFF).  Festival director Kevin Lambert took some time from his busy schedule to answer questions about the festival which... END_OF_DOCUMENT_TOKEN_TO_BE_REPLACED

Having a film selected to premiere at the Cannes Film Festival is an incredible achievement - having two is quite extraordinary. Yet that is precisely what director Hong Sang-soo has done, as The Day After (그 후) and Claire's Camera (클레어의 카메라) are due to be screened, with both films starring actress Kim Min-hee. Selected for the 'In Competition'... END_OF_DOCUMENT_TOKEN_TO_BE_REPLACED
The Villainess (악녀) has received an explosive trailer in the run-up to its debut at the Cannes Film Festival on May 21st. Appearing in the 'Out of Competition - Midnight Projections' program, writer/director Jung Byung-gil's latest... END_OF_DOCUMENT_TOKEN_TO_BE_REPLACED
Director Bong Joon-ho's Okja (옥자) is almost upon us. The highly anticipated science-fiction/drama is set to premiere In Competition at the Cannes Int. Film Festival on May 19th, before appearing on Korean cinema screens around June... END_OF_DOCUMENT_TOKEN_TO_BE_REPLACED