No stranger to controversy, director Kim Ki-duk’s latest film Moebius (뫼비우스) appears to be pushing more boundaries than ever before. Billed as his most controversial film to date, sexual thriller Moebius explores the themes of incest, genital dismemberment, and dark sado-masochistic desires within a family unit, employing the director’s trademark silent characterisation in emphasising the severity of their actions.

The story depicts a mother (Lee Eun-woo (이은우) who, sick of her husband’s (Jo Jae-hyeon (조재현) constant infidelities, plots her own unique brand of revenge. However the conflict dramatically backfires upon their son (Seo Yeong-joo (서영주), with the resulting shame forcing the mother into exile. While the father and son attempt to build their relationship once again, their lives are once again thrown into turmoil when the mother returns, sparking a dramatic chain of events towards an even darker path. 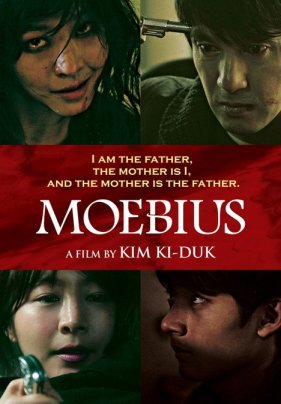 Perhaps unsurprisingly, Moebius was initially rejected by The Korean Media Rating Board upon submission, bestowing a ‘restricted’ rating upon the film. Yet as there are no cinemas in Korea that are licensed to screen ‘restricted’ rated films, the decision effectively meant that director Kim’s latest could not be released domestically. In a statement the Board explained, “The story and contents of the movie are highly violent, terrifying and harmful to underage audiences. The unethical and unsocial expressions of sexual activity between immediate family members make it only suitable for screening in limited theaters”. However, after director Kim edited several of the more controversial scenes from the film, Moebius was finally approved for domestic release, which should occur sometime in early September.

Interestingly such issues have not effected director Kim’s reputation abroad, as the film has been selected by both Venice and Toronto for their respective film festivals. Kim’s Pieta was the big winner at last year’s Venice Film Festival, scooping the highly coveted ‘Golden Lion’ award for best film, while this year’s Moebius will be screened as part of the ‘Out of Competition’ category. Toronto Film Festival are due to screen the film under their ‘Masters’ program, describing the film as bearing, “the clear mark of Kim’s singular genius. It’s a modern Greek tragedy bordering on psychological thriller, a pitchblack comedy, a crazy-weird depiction of pain-induced pleasure.”

Love him or loathe him, Kim Ki-duk’s films are consistently fascinating. Audiences will be able to form their own opinions regarding Moebius in early September. Please see below for the trailer.

For Korean cinema, 2019 was a year that saw the continuation of trends that have been readily apparent for the past several years - an increasing number of big blockbuster/commercially-orientated films with high production values, and the decreasing quality of creative, engaging, and memorable stories. That is not to say the talent has disappeared of... END_OF_DOCUMENT_TOKEN_TO_BE_REPLACED
2018 was quite a bizarre year for Korean cinema. The year began much like any other. The first few months of the year were typically dedicated to family-friendly fare. News of Korean films that were... END_OF_DOCUMENT_TOKEN_TO_BE_REPLACED
While the films released throughout any particular year are indicative of a country's identity, for Korean cinema in 2017 the exploration of political and social issues were especially revealing of the cultural shift that has... END_OF_DOCUMENT_TOKEN_TO_BE_REPLACED

Acclaimed actress Jeon Do-yeon is to be honoured at the 21st Bucheon International Fantastic Film Festival (BiFan) this year, in celebration of her 20 year career that began with Contact back in 1997. Entitled 'Contact, Jeon Do-yeon,' the special program is dedicated to the revered actress and will feature highlights from her incredible filmography, including Secret Sunshine... END_OF_DOCUMENT_TOKEN_TO_BE_REPLACED
Director Kim Jong-Kwan is well-known to fans of independent Korean cinema. A graduate of the Seoul Institute of the Arts, his short film How to Operate a Polaroid... END_OF_DOCUMENT_TOKEN_TO_BE_REPLACED
We are just one week away from the start of the 2nd Korea International Expat Film Festival (KIXFF).  Festival director Kevin Lambert took some time from his busy schedule to answer questions about the festival which... END_OF_DOCUMENT_TOKEN_TO_BE_REPLACED

Having a film selected to premiere at the Cannes Film Festival is an incredible achievement - having two is quite extraordinary. Yet that is precisely what director Hong Sang-soo has done, as The Day After (그 후) and Claire's Camera (클레어의 카메라) are due to be screened, with both films starring actress Kim Min-hee. Selected for the 'In Competition'... END_OF_DOCUMENT_TOKEN_TO_BE_REPLACED
The Villainess (악녀) has received an explosive trailer in the run-up to its debut at the Cannes Film Festival on May 21st. Appearing in the 'Out of Competition - Midnight Projections' program, writer/director Jung Byung-gil's latest... END_OF_DOCUMENT_TOKEN_TO_BE_REPLACED
Director Bong Joon-ho's Okja (옥자) is almost upon us. The highly anticipated science-fiction/drama is set to premiere In Competition at the Cannes Int. Film Festival on May 19th, before appearing on Korean cinema screens around June... END_OF_DOCUMENT_TOKEN_TO_BE_REPLACED