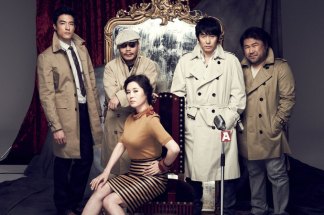 Original director Lee Myeong-se and the cast of The Spy/Mr. K

Superstars Seol Kyeong-gu (설경구) and Moon So-ri (문소리) are again teaming up for the big screen, this time with Daniel Henney (다니엘 헤니) for an action/comedy tentatively titled The Spy: Undercover Operation (스파이/협상종결자).

The film – initially called Mr. K – has been in development for quite some time and has been surrounded in controversy, chiefly due to the very public disagreements between original director Lee Myeong-se (이명세) and the production team, whose visions for the blockbuster apparently differed wildly. Director Lee, whose credits include M (엠) and Duelist (형사), is an excellent filmmaker and one of the few genuine auteurs working within the Korean film industry today, however it was always something of an odd choice to have such an artistically-minded person at the helm of a big summer film. With director Lee’s departure, new director Lee Seung-joon (이승준), who was the assistant director on action film Quick (퀵) was brought on board, and now finally a trailer has arrived.

The Spy: Undercover Operation sees top Korean spy Kim Cheol-su (Seol Kyeong-gu) on a mission to solve a terrorist attack that occurs in Seoul, with the investigation taking him to Thailand. Yet being the best has meant neglecting his flight attendant wife Young-hee (Moon So-ri), putting a strain on the relationship. However while undercover in Bangkok, Cheol-su spots his wife with handsome rival Ryan (Daniel Henney) and begins to go against orders to discover what his wife is up to.

It’s quite a departure for the Seol/Moon team-up that brought audiences powerhouse performances in Oasis (오아시스) and Peppermint Candy (박하사탕). Let us know your thoughts in the comments below.

For Korean cinema, 2019 was a year that saw the continuation of trends that have been readily apparent for the past several years - an increasing number of big blockbuster/commercially-orientated films with high production values, and the decreasing quality of creative, engaging, and memorable stories. That is not to say the talent has disappeared of... END_OF_DOCUMENT_TOKEN_TO_BE_REPLACED
2018 was quite a bizarre year for Korean cinema. The year began much like any other. The first few months of the year were typically dedicated to family-friendly fare. News of Korean films that were... END_OF_DOCUMENT_TOKEN_TO_BE_REPLACED
While the films released throughout any particular year are indicative of a country's identity, for Korean cinema in 2017 the exploration of political and social issues were especially revealing of the cultural shift that has... END_OF_DOCUMENT_TOKEN_TO_BE_REPLACED

Acclaimed actress Jeon Do-yeon is to be honoured at the 21st Bucheon International Fantastic Film Festival (BiFan) this year, in celebration of her 20 year career that began with Contact back in 1997. Entitled 'Contact, Jeon Do-yeon,' the special program is dedicated to the revered actress and will feature highlights from her incredible filmography, including Secret Sunshine... END_OF_DOCUMENT_TOKEN_TO_BE_REPLACED
Director Kim Jong-Kwan is well-known to fans of independent Korean cinema. A graduate of the Seoul Institute of the Arts, his short film How to Operate a Polaroid... END_OF_DOCUMENT_TOKEN_TO_BE_REPLACED
We are just one week away from the start of the 2nd Korea International Expat Film Festival (KIXFF).  Festival director Kevin Lambert took some time from his busy schedule to answer questions about the festival which... END_OF_DOCUMENT_TOKEN_TO_BE_REPLACED

Having a film selected to premiere at the Cannes Film Festival is an incredible achievement - having two is quite extraordinary. Yet that is precisely what director Hong Sang-soo has done, as The Day After (그 후) and Claire's Camera (클레어의 카메라) are due to be screened, with both films starring actress Kim Min-hee. Selected for the 'In Competition'... END_OF_DOCUMENT_TOKEN_TO_BE_REPLACED
The Villainess (악녀) has received an explosive trailer in the run-up to its debut at the Cannes Film Festival on May 21st. Appearing in the 'Out of Competition - Midnight Projections' program, writer/director Jung Byung-gil's latest... END_OF_DOCUMENT_TOKEN_TO_BE_REPLACED
Director Bong Joon-ho's Okja (옥자) is almost upon us. The highly anticipated science-fiction/drama is set to premiere In Competition at the Cannes Int. Film Festival on May 19th, before appearing on Korean cinema screens around June... END_OF_DOCUMENT_TOKEN_TO_BE_REPLACED
Join 143 other followers