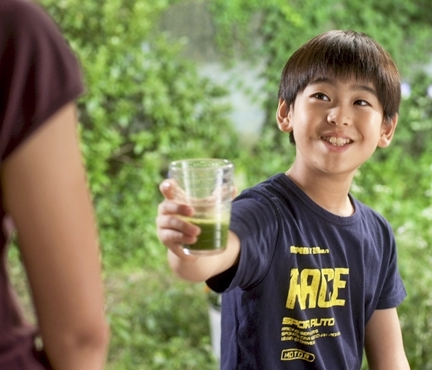 At the 2013 Jeonju International Film Festival, Sweet Temptation (잘 먹고 잘 사는 법) had the distinction of walking away with the Grand Prize in the Korean Short Film Competition. It’s highly likely that the film will continue to do well on the festival circuit as director Jeong Han-Jin (정한진) has crafted a lovely tale about the bond between mother and son, and the role of food in maintaining and developing the relationship. Combined with the charming character study involving a young boy’s loyalty, as well as some very attractive cinematography, Sweet Temptation is an endearing and memorable short film. Jeong-ho lives alone with his mother and their bond grows ever stronger as they cultivate fruits and vegetables together, before returning home to prepare them for meals. Their life is seemingly idyllic, until a girl at school tempts Jeong-ho with an offer of chocolate. Conflicted between loyalty and desire, he must make a choice to decide what kind of person he wants to be.

Director Jeong wonderfully conveys the lives of Jeong-ho and his mother as they work on the allotments for produce. The vibrancy of the countryside articulates the happiness and warmth they feel when together as well as the satisfaction of eating the fruits and vegetables they’ve spent all day harvesting, which themselves are full of colour. The bright red tomatoes, pale green cucumbers, electric orange carrots and so on all combine to portray a high-spirited, and very healthy, satisfaction with their efforts. After such a heartwarming opening director Jeong then begins to slowly and gently peel back the layers from the seemingly idyllic lifestyle revealing it to be anything but simple. This subtlety is easily one of the greatest strengths of the film as Jeong-ho, while happy, is not content.

Jeong-ho’s school life is where Sweet Temptation really becomes a compelling film. In running around with other children and comparing food during lunch time, the young boy is actually somewhat of an outsider. Recognising this, a girl in his class takes pity on him and as they begin to forge a relationship Jeong-ho becomes ever more conflicted, as his new friend represents temptations that lead away from the teachings of his mother. The symbolic and innocent relationship is genuinely lovely and sincere, particularly as they attempt to educate each other on food. As such the ‘sweet temptation’ comes to mean not only the chocolate and promise of tasty meals, but also the desire for someone’s affection other than his mother, and watching Jeong-ho’s internal conflict unfold is a real highlight. The young actor portraying the character does an excellent job in conveying torn loyalties, and when placed in compromising situations his deeply sad and frustrated reactions are often palpable.

If there is criticism to be had, it comes in the form of the running time. Sweet Temptation is a consistently compelling short film, and director Jeong weaves some really interesting plot threads within the narrative that are never fully realised or explored. This is a real shame as these hints at a wider world and family history would undoubtedly be as equally fascinating with the director’s gentle stylisation. However, despite such drawbacks Sweet Temptation is a charming and endearing film and certainly warms the heart for a good deal after the final credits.

Sweet Temptation won the Grand Prize at the 2013 Jeonju Film Festival in the Korean Short Film category, and not without good reason. Director Jeong Han-Jin has produced a lovely and endearing story about the bond between mother and son, and temptations that forge internal conflict in innocent minds. While plot threads are not capitalised on due to the short running time, Sweet Temptation remains a charming and heart-warming film.

For Korean cinema, 2019 was a year that saw the continuation of trends that have been readily apparent for the past several years - an increasing number of big blockbuster/commercially-orientated films with high production values, and the decreasing quality of creative, engaging, and memorable stories. That is not to say the talent has disappeared of... END_OF_DOCUMENT_TOKEN_TO_BE_REPLACED
2018 was quite a bizarre year for Korean cinema. The year began much like any other. The first few months of the year were typically dedicated to family-friendly fare. News of Korean films that were... END_OF_DOCUMENT_TOKEN_TO_BE_REPLACED
While the films released throughout any particular year are indicative of a country's identity, for Korean cinema in 2017 the exploration of political and social issues were especially revealing of the cultural shift that has... END_OF_DOCUMENT_TOKEN_TO_BE_REPLACED

Acclaimed actress Jeon Do-yeon is to be honoured at the 21st Bucheon International Fantastic Film Festival (BiFan) this year, in celebration of her 20 year career that began with Contact back in 1997. Entitled 'Contact, Jeon Do-yeon,' the special program is dedicated to the revered actress and will feature highlights from her incredible filmography, including Secret Sunshine... END_OF_DOCUMENT_TOKEN_TO_BE_REPLACED
Director Kim Jong-Kwan is well-known to fans of independent Korean cinema. A graduate of the Seoul Institute of the Arts, his short film How to Operate a Polaroid... END_OF_DOCUMENT_TOKEN_TO_BE_REPLACED
We are just one week away from the start of the 2nd Korea International Expat Film Festival (KIXFF).  Festival director Kevin Lambert took some time from his busy schedule to answer questions about the festival which... END_OF_DOCUMENT_TOKEN_TO_BE_REPLACED

Having a film selected to premiere at the Cannes Film Festival is an incredible achievement - having two is quite extraordinary. Yet that is precisely what director Hong Sang-soo has done, as The Day After (그 후) and Claire's Camera (클레어의 카메라) are due to be screened, with both films starring actress Kim Min-hee. Selected for the 'In Competition'... END_OF_DOCUMENT_TOKEN_TO_BE_REPLACED
The Villainess (악녀) has received an explosive trailer in the run-up to its debut at the Cannes Film Festival on May 21st. Appearing in the 'Out of Competition - Midnight Projections' program, writer/director Jung Byung-gil's latest... END_OF_DOCUMENT_TOKEN_TO_BE_REPLACED
Director Bong Joon-ho's Okja (옥자) is almost upon us. The highly anticipated science-fiction/drama is set to premiere In Competition at the Cannes Int. Film Festival on May 19th, before appearing on Korean cinema screens around June... END_OF_DOCUMENT_TOKEN_TO_BE_REPLACED
Join 143 other subscribers