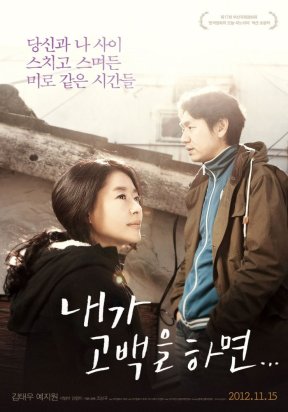 The Winter of the Year was Warm (내가 고백을 하면)

All too often, cinematic representations of love employ a host of cliches and happenstance in order for lovelorn individuals to meet. While the predictability of such narrative devices are relished by some and despised by others, the sense of realism is more often than not shunned in favor of more crowd-pleasing moments that bring the couple closer.

The Winter of the Year was Warm (내가 고백을 하면) soundly rejects such notions. Director David Cho (조성규) has constructed a story whereby the blossoming romance that features is very much a natural development born out of the drama that occurs, and as such is a refreshing and quite charming tale. Ironically therein also lies the main issue with the film, in that director Cho spends so much time establishing the lives of the central couple and the origins of the burgeoning romance that there is little payoff.

Operating as a theater owner and film director, Seoulite In-seong (Kim Tae-woo (김태우) loves nothing more than to visit the coastal city of Gangneung at the weekends to rest and enjoy the local cuisine. However, Gangneung resident nurse Yoo-jeong (Ye Ji-won (예지원) travels to Seoul every weekend to escape daily stress and experience the culture of the capital city. As the two meet by chance and become increasingly more acquainted, In-seong and Yoo-jeong agree to swap apartments at weekends to make their travels more convenient. In doing so, they discover more about each other and realise they have more in common than they first believed. 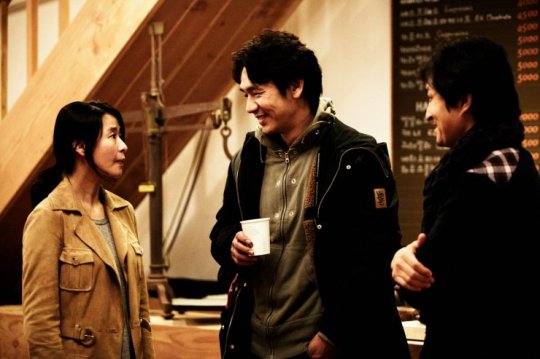 Director Cho, who has produced an incredible amount of films over the past few years, uses his knowledge of the film industry well in conveying In-seong’s frustrations at working in the business. The variety of meetings with odd film professionals and his continual begging for funds are humourous to watch, more so for those familiar with the industry. The comedy throughout The Winter of the Year was Warm is not of the laugh-out-loud variety, but of the ironies and quirky moments that occur in life that subtly gesture in new avenues and experiences. Such comic social realism is also ascribed with Yoo-jeong. Due to the selfishness of her Seoulite friend, Yoo-jeong is forced to sleep at a motel and listen to the amourous moans of neighbouring couples, a funny event that forces her to consider finding a home in Seoul. Through the gentle pacing and delicate characterisation, it becomes clear that both Yoo-jeong and In-seong seek an escape from the stresses in their lives, running to different cities in a bid to alleviate tension yet, ironically, tend to encounter more.

Through a chance meeting at a coffee shop in Gangneung, which serves as the ‘hub’ of the film, In-seong and Yoo-jeong become acquainted. The awkwardness of the first meeting is conveyed well by the actors who perform with a natural sincerity that is quite charming, while the long-takes used by the director imply a level of realism that makes their meeting wholly believable. In a more contrived romantic-drama the couple would immediately discuss the option of exchanges homes for the weekend and agree, but it’s to the films credit that Yoo-jeong refuses. Her hesitation on the matter is logically sound given that they are unfamiliar, and it’s a decision that allows the narrative to explore their gradual development and burgeoning relationship. 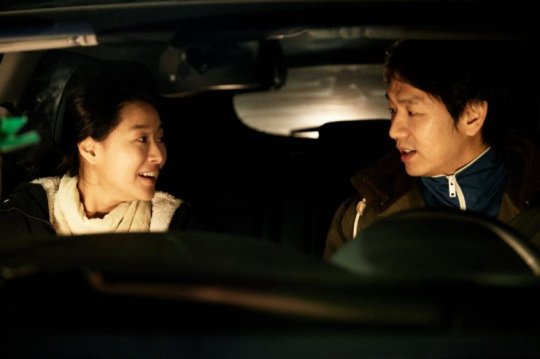 After a trip to the karaoke room, In-seong and Yoo-jeong become closer

While such a sensitive portrayal of their fledgling relationship is refreshing and lends credibility, it is during this time that the narrative becomes stuck. The establishment of Yoo-jeong’s life as a nurse and relationship woes are portrayed well and serve as a great counterpoint to In-seong, yet most other scenes are often superfluous and add little impetus to the main story. This is undoubtedly director Cho’s intention, to capture the smaller, more trivial moments of life, but it becomes bland rather quickly. In fact, there are a great many scenes which could easily be edited out without affecting the overall story, as much of the second act is spent attempting to expand characterization without really providing much in the way of new, or interesting, information.

The Winter of the Year was Warm does thankfully pickup however once the home exchange has been agreed. It is through these scenes that the film finds its originality as the two explore each others tastes in films and music, and are forced to communicate as they break house rules due to bad habits. The swap also instigates some of most humourous scenes in the entire film, and it’s a real shame this area wasn’t expanded upon further as they are genuinely enjoyable and propel the relationship forward. Such irony even strikes the finale of the romantic-drama, as the relationship just starts blossom into romance as the film ends, leaving the audience to surmise how the couple become even closer. 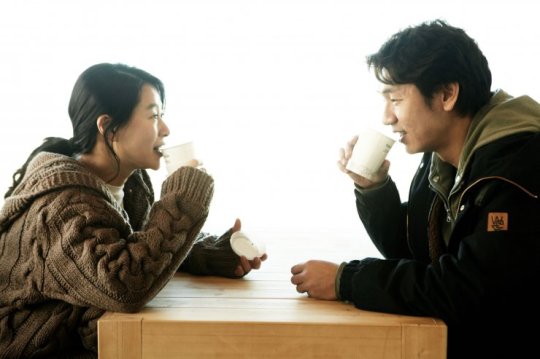 The story ends just as the relationship begins

By employing a greater focus on gentle social realism and irony, The Winter of the Year was Warm is a refreshing take on the romantic-drama. Director David Cho has created a quite charming tale of two middle-aged singletons attempting to escape their daily lives yet finding something more, employing subtle development and humourous satire to enjoyable effect. While the second act goes on for too long, the film picks up once their homes have been exchanged and they discover more about each other, serving to make the film a quite charming exploration of the origins of romance.

For Korean cinema, 2019 was a year that saw the continuation of trends that have been readily apparent for the past several years - an increasing number of big blockbuster/commercially-orientated films with high production values, and the decreasing quality of creative, engaging, and memorable stories. That is not to say the talent has disappeared of... END_OF_DOCUMENT_TOKEN_TO_BE_REPLACED
2018 was quite a bizarre year for Korean cinema. The year began much like any other. The first few months of the year were typically dedicated to family-friendly fare. News of Korean films that were... END_OF_DOCUMENT_TOKEN_TO_BE_REPLACED
While the films released throughout any particular year are indicative of a country's identity, for Korean cinema in 2017 the exploration of political and social issues were especially revealing of the cultural shift that has... END_OF_DOCUMENT_TOKEN_TO_BE_REPLACED

Acclaimed actress Jeon Do-yeon is to be honoured at the 21st Bucheon International Fantastic Film Festival (BiFan) this year, in celebration of her 20 year career that began with Contact back in 1997. Entitled 'Contact, Jeon Do-yeon,' the special program is dedicated to the revered actress and will feature highlights from her incredible filmography, including Secret Sunshine... END_OF_DOCUMENT_TOKEN_TO_BE_REPLACED
Director Kim Jong-Kwan is well-known to fans of independent Korean cinema. A graduate of the Seoul Institute of the Arts, his short film How to Operate a Polaroid... END_OF_DOCUMENT_TOKEN_TO_BE_REPLACED
We are just one week away from the start of the 2nd Korea International Expat Film Festival (KIXFF).  Festival director Kevin Lambert took some time from his busy schedule to answer questions about the festival which... END_OF_DOCUMENT_TOKEN_TO_BE_REPLACED

Having a film selected to premiere at the Cannes Film Festival is an incredible achievement - having two is quite extraordinary. Yet that is precisely what director Hong Sang-soo has done, as The Day After (그 후) and Claire's Camera (클레어의 카메라) are due to be screened, with both films starring actress Kim Min-hee. Selected for the 'In Competition'... END_OF_DOCUMENT_TOKEN_TO_BE_REPLACED
The Villainess (악녀) has received an explosive trailer in the run-up to its debut at the Cannes Film Festival on May 21st. Appearing in the 'Out of Competition - Midnight Projections' program, writer/director Jung Byung-gil's latest... END_OF_DOCUMENT_TOKEN_TO_BE_REPLACED
Director Bong Joon-ho's Okja (옥자) is almost upon us. The highly anticipated science-fiction/drama is set to premiere In Competition at the Cannes Int. Film Festival on May 19th, before appearing on Korean cinema screens around June... END_OF_DOCUMENT_TOKEN_TO_BE_REPLACED