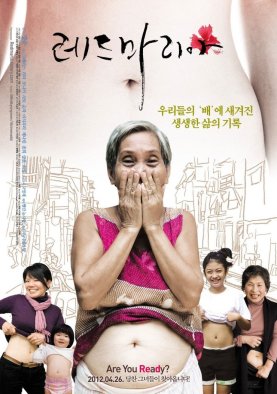 The dilemmas facing women in South-East Asian countries are multitudinous. Despite the great variety of countries within the region, and regardless of the diverse cultures and heritage, each nation has one thing in common – the dominance of patriarchy. As such the role of women as wives, mothers and homemakers has been, and continues to be, difficult to shift even though increasing numbers of women have entered the workplace. Interestingly this in itself is problematic in defining the term ‘labor’ in regards to females. Traditionally the word refers to employment in exchange for money and/or trade goods, but as females occupy such diverse roles the definition is difficult to clarify.

Director Kyung Soon (경순) attempts to address the quandary through her documentary Red Maria (레드 마리아). During the course of the film, the director explores the concept of women’s labor within South Korea, Japan, and The Philippines documenting the lives of a number of females each with her own struggles. From unfairly dismissed employees and care workers, to women working in the sex trade and the homeless, director Kyung Soon seeks to convey that while each of the females within are not connected physically, the trials they endure and their strength of character unite them spiritually in the struggle against oppressive patriarchy. Such an objective is incredibly ambitious, and while this does allow for a highly interesting documentary the sheer number of participants makes the film overstretched and lacking an emotional core, while the editing and other post-production techniques also detract from the experience.

A care worker in Japan allows insight into her daily life

In attempting to convey the daily struggles of South-East Asian women, director Kyung Soon deserves praise indeed as it is rarely touched upon in mainstream cinema. The concept of women’s labor and it’s definition is certainly intriguing given the variety of cultures and statuses within the region. However, her desire to capture so much information is also her undoing as the documentary is, while very interesting, lacking in focus. The multitude of characters that inhabit the film also suffer the same fate as while each person is intriguing, they are given only brief segments of time before the audience is whisked off to another location and situation.

This particularly applies to the women from The Philippines. The Filipino women are far and away the greatest assets of Red Maria. Their stories are poignant and tender, and the sincerity of their emotions and their drive to continue on despite obstacles are the heart and soul of the film. The women profiled are those who have fallen outside the margins, those living in slums, working in the sex trade, and the elderly. Their stories are heart-breaking yet inspiring as they refuse to let the severity of their respective situations dampen their spirits. Scenes in which senior Filipino women describe the rape of an entire village decades before by Japanese soldiers cannot fail to shock, while the generations of women – within the same family – working in the sex trade is incredibly saddening. Likewise, the families living within the slums being forcefully evicted are compelling to say the least. Yet with each struggle there is hope due to the incredible resilience of the women involved, whether fighting for the truth and an apology, studying to change career, or even refusing to move, the Filipino women are inspiring in their strength and tenacity. These scenes also provide Red Maria with the greatest visuals throughout the film. Within the slums for example, a train passes mere inches from the abodes of those that reside there in comically stunning fashion. The senior women show the location of the mass rapes, a large red mansion in the country which is incredibly sinister and reminiscent of horror films. Their stories are the most compelling feature of Red Maria, and had director Kyung Soon continued to follow their development the documentary would be much stronger for it.

However, as South Korean and Japanese women are also profiled the tone of the documentary consistently changes and is quite jarring. Alternating between these locations also unfairly lessons the impact and seriousness of those in Korea and Japan. While women in The Philippines struggle to survive, the women from other countries are protesting against unfair dismissal, working as care workers or travel agents, or living in a tent in the woods. Their situations are interesting and important in emphasizing alternative forms of patriarchal oppression, but it is impossible not to compare and contrast with the more uncompromising situations faced by their counterparts.  It also doesn’t help that so little screen time is dedicated to them, nor that their innermost thoughts are not really revealed, making it difficult to empathize with the struggles they endure. There are also instances which beg for more insight that never appear, such as workers rights and governmental and police hostility towards demonstrators, the difficulties of living homeless, and being an immigrant bride. Such areas are never explored fully, to the detriment of empathizing with the plights the women face. Additionally some claims – such as South Korea not being ready to accept sex workers – are downright odd, considering the sheer number of Korean prostitutes that operate within the country.

Post-production is also an issue with Red Maria. Generally the editing is competent, yet there are several instances in which the documentary appears to be winding towards a finale only to pick up again and continue on. Scenes such as young Filipino women playing on the beach are inserted yet serve no purpose. The use of text highly detracts from the film as well, as the variety of different fonts, the occasional appearance of the director’s thoughts, and some flashy graphic work often serve to pull the audience out of the film. One of the interesting highlights of the film is the frequent recurrence of women’s stomachs which are symbolic of numerous attributes of the term ‘labor’, but oddly the text is never used to explain the director’s thoughts on this issue.

A recurring motif, a woman’s stomach symbolises the diversity of the term ‘labor’

Red Maria is a highly interesting documentary, and director Kyung Soon deserves praise indeed for attempting to profile the subjugation of women under oppressive patriarchy in South-East Asia. Yet her desire to explore the concept of women’s labor proves to be far too broad in scope, resulting in a lack of character and debate development, as well as audience empathy. Yet it is the Filipino women who are the genuine highlight of the film, bringing incredible poignancy and inspiration to the discussion, and make Red Maria worth watching.

For Korean cinema, 2019 was a year that saw the continuation of trends that have been readily apparent for the past several years - an increasing number of big blockbuster/commercially-orientated films with high production values, and the decreasing quality of creative, engaging, and memorable stories. That is not to say the talent has disappeared of... END_OF_DOCUMENT_TOKEN_TO_BE_REPLACED
2018 was quite a bizarre year for Korean cinema. The year began much like any other. The first few months of the year were typically dedicated to family-friendly fare. News of Korean films that were... END_OF_DOCUMENT_TOKEN_TO_BE_REPLACED
While the films released throughout any particular year are indicative of a country's identity, for Korean cinema in 2017 the exploration of political and social issues were especially revealing of the cultural shift that has... END_OF_DOCUMENT_TOKEN_TO_BE_REPLACED

Acclaimed actress Jeon Do-yeon is to be honoured at the 21st Bucheon International Fantastic Film Festival (BiFan) this year, in celebration of her 20 year career that began with Contact back in 1997. Entitled 'Contact, Jeon Do-yeon,' the special program is dedicated to the revered actress and will feature highlights from her incredible filmography, including Secret Sunshine... END_OF_DOCUMENT_TOKEN_TO_BE_REPLACED
Director Kim Jong-Kwan is well-known to fans of independent Korean cinema. A graduate of the Seoul Institute of the Arts, his short film How to Operate a Polaroid... END_OF_DOCUMENT_TOKEN_TO_BE_REPLACED
We are just one week away from the start of the 2nd Korea International Expat Film Festival (KIXFF).  Festival director Kevin Lambert took some time from his busy schedule to answer questions about the festival which... END_OF_DOCUMENT_TOKEN_TO_BE_REPLACED

Having a film selected to premiere at the Cannes Film Festival is an incredible achievement - having two is quite extraordinary. Yet that is precisely what director Hong Sang-soo has done, as The Day After (그 후) and Claire's Camera (클레어의 카메라) are due to be screened, with both films starring actress Kim Min-hee. Selected for the 'In Competition'... END_OF_DOCUMENT_TOKEN_TO_BE_REPLACED
The Villainess (악녀) has received an explosive trailer in the run-up to its debut at the Cannes Film Festival on May 21st. Appearing in the 'Out of Competition - Midnight Projections' program, writer/director Jung Byung-gil's latest... END_OF_DOCUMENT_TOKEN_TO_BE_REPLACED
Director Bong Joon-ho's Okja (옥자) is almost upon us. The highly anticipated science-fiction/drama is set to premiere In Competition at the Cannes Int. Film Festival on May 19th, before appearing on Korean cinema screens around June... END_OF_DOCUMENT_TOKEN_TO_BE_REPLACED