On Thursday the 26th of January, the Korean Culture Centre in London held the first of twelve planned Q+A film nights with legendary Korean directors.

For January’s edition the director in question was Lee Myeong-se (이명세) in conjunction with his 2005 film ‘Duelist’ (형사). Presiding over the event was Dr. Daniel Martin who introduced both the film and the director, giving the history and context to Lee Myeong-se’s (이명세) illustrious career and auteuristic sensibilities.

The film was very well-received by the audience, and during the following Q+A Lee Myeong-se (이명세) was in good humour throughout and very entertaining.

Dr. Daniel Martin began the Q+A with some questions about Lee Myeong-se’s (이명세) career, and particularly the actors that he has worked with. The director replied that he wanted to work with Ahn Seong-gi (안성기) as the actor had a very strong image as a good man in Korean cinema, and that his roles were limited due to typecasting. Director Lee wanted to change that and play with such preconceptions and cast him in Nowhere to Hide. In addition, Director Lee also cast his own mentor in a comedic role, as he had always had ambitions to be an actor; yet his mentor later revealed the role reversal, where Director Lee had to give instruction, had made him rather uncomfortable. In regards to using younger actors, Director Lee said he was impressed with Ha Ji-won’s (하지원) TV drama work and Kang Dong-won (강동원) had acted well in a prior film and had the ‘look’ he wanted.

For his next project, Director Lee stated he is planning an action film titled ‘Mr. K’ and jokingly claimed that it will surpass the James Bond films. 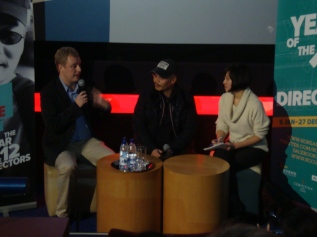 When asked about why he is concerned with the artificiality of cinema rather than attempting to achieve realism, Director Lee answered that he didn’t watch films when he was young which he is now grateful for as he wasn’t exposed to the conventions of cinema. Instead he is inspired by poetry and other creative works in discovering ‘what makes a film’.

In regards to the wide variety of music from other cultures and eras within ‘Duelist’ (형사), Lee Myeong-se (이명세) replied that if he likes music and it fits with his vision within a film, then he will use it regardless of faithfulness to an era.

Quizzed about his own martial arts prowess, Director Lee explained that he, like all Korean men who have undertaken military service, is a black belt in Taekwondo. However if he were to give a display, it would be highly comedic.

Following this, the director very kindly gave autographs and pictures to those who attended – including me!

Me with director Lee Myeong-se!

Next month, the Korean Cultural Centre will be dedicated to director E J-yong with the Q+A to be held on February the 23rd alongside the screening of his 2009 film Actresses (여배우들).

For Korean cinema, 2019 was a year that saw the continuation of trends that have been readily apparent for the past several years - an increasing number of big blockbuster/commercially-orientated films with high production values, and the decreasing quality of creative, engaging, and memorable stories. That is not to say the talent has disappeared of... END_OF_DOCUMENT_TOKEN_TO_BE_REPLACED
2018 was quite a bizarre year for Korean cinema. The year began much like any other. The first few months of the year were typically dedicated to family-friendly fare. News of Korean films that were... END_OF_DOCUMENT_TOKEN_TO_BE_REPLACED
While the films released throughout any particular year are indicative of a country's identity, for Korean cinema in 2017 the exploration of political and social issues were especially revealing of the cultural shift that has... END_OF_DOCUMENT_TOKEN_TO_BE_REPLACED

Acclaimed actress Jeon Do-yeon is to be honoured at the 21st Bucheon International Fantastic Film Festival (BiFan) this year, in celebration of her 20 year career that began with Contact back in 1997. Entitled 'Contact, Jeon Do-yeon,' the special program is dedicated to the revered actress and will feature highlights from her incredible filmography, including Secret Sunshine... END_OF_DOCUMENT_TOKEN_TO_BE_REPLACED
Director Kim Jong-Kwan is well-known to fans of independent Korean cinema. A graduate of the Seoul Institute of the Arts, his short film How to Operate a Polaroid... END_OF_DOCUMENT_TOKEN_TO_BE_REPLACED
We are just one week away from the start of the 2nd Korea International Expat Film Festival (KIXFF).  Festival director Kevin Lambert took some time from his busy schedule to answer questions about the festival which... END_OF_DOCUMENT_TOKEN_TO_BE_REPLACED

Having a film selected to premiere at the Cannes Film Festival is an incredible achievement - having two is quite extraordinary. Yet that is precisely what director Hong Sang-soo has done, as The Day After (그 후) and Claire's Camera (클레어의 카메라) are due to be screened, with both films starring actress Kim Min-hee. Selected for the 'In Competition'... END_OF_DOCUMENT_TOKEN_TO_BE_REPLACED
The Villainess (악녀) has received an explosive trailer in the run-up to its debut at the Cannes Film Festival on May 21st. Appearing in the 'Out of Competition - Midnight Projections' program, writer/director Jung Byung-gil's latest... END_OF_DOCUMENT_TOKEN_TO_BE_REPLACED
Director Bong Joon-ho's Okja (옥자) is almost upon us. The highly anticipated science-fiction/drama is set to premiere In Competition at the Cannes Int. Film Festival on May 19th, before appearing on Korean cinema screens around June... END_OF_DOCUMENT_TOKEN_TO_BE_REPLACED