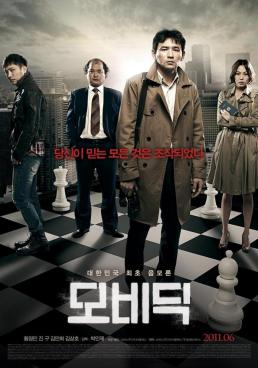 Conspiracy theory films, and the inherent shadowy figures that operate within and/or behind the government, are a fun and exhilarating sub-genre that express audience distrust of institutions as well as emphasizing their impotency. They also have an uncanny knack for tapping into social anxieties. With the Bourne series (2002-2007) the post-9/11 ‘Patriot Act’ was vehemently scrutinized, as the shadow operatives abused the use of satellites and phones in targeting alleged terrorists. Similarly Enemy of the State (1998) portrayed senior members of the NSA murdering senators and civilians alike to expand their power base and withhold information.

Moby Dick (모비딕) is concerned with the conspiracy theories that plague the South Korean government, a premise with huge potential due to the often tumultuous relationship with the North. However, due to the bland and uneven narrative and direction, central protagonists that lack charisma or intelligence, and most importantly the distinct lack of threat posed by the shadow organisation, Moby Dick largely fails.

Lee Bang-woo  (Hwang Jeong-min (황정민) is a newspaper reporter constantly waiting for the next big scoop in order to become renowned. When a bridge explodes and the government quickly blames the incident on North Korean spies, Bang-woo decides to visit the scene and bribes his informant for extra details. Shortly thereafter Bang-woo is visited by his young friend Yoon Hyeok (Jin Goo (진구), on the run for desertion, carrying a bag full of official documents and disks. Examining the paraphernalia Bang-woo realises there’s much more to the explosion, and other mysterious events, then previously thought and puts together a team of reporters – polite rival Son Jin-gi  (Kim Sang-ho (김상호) and code cracker Seong Hyo-gwan  (Kim Min-hee (김민희) – to uncover the secrets of the shadow government organisation whose symbol is ‘Moby Dick’. 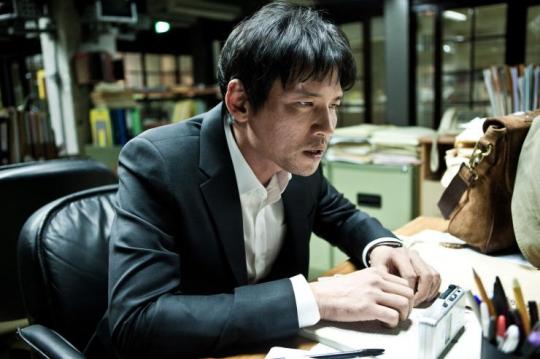 Bang-woo begins to understand that other forces are at work

Moby Dick is directed by Park In-je (박인제) competently, and the potential of the notion of a shadow government has incredible potential for a thrilling, gritty tale of political espionage. However the  narrative is often in complete disarray and lacking in focus that any sense of compulsion, and worse still immediacy, are completely lost. The opening shot of Moby Dick is the televisual image displayed from a CCTV camera as a bridge explodes; this in itself forces audience detachment from the severity of the cataclysmic event as the impact and ramifications are unseen, and considering it is the catalyst for the entire film is a rather odd form of representation. What follows is a supremely dull first act as protagonists are introduced sporadically and lacking in motivation. Bang-woo is a woefully underdeveloped protagonist who routinely displays naivety and idiocy, and aside from curiosity and selfish desire has little motivation for investigating either the explosion or the conspiracy. He is utterly inept at investigation and continually places himself and his colleagues in danger needlessly, yet his impotency is dwarfed by the unbelievable inefficiency of the covert group signified by the white whale. The syndicate are effectively reduced to hired thugs rather than efficient spies, who even display street signs highlighting that they are in residence – in crowded public areas no-less. Supervising the group is a mysterious man in a suit who, bizarrely, sits at a desk in an empty room the size of an entire floor in a building. Such a cliche again adds nothing to the threat apparently posed by the covert operatives who consistently appear unsure of their next move, from the illogical indecision to not ‘eliminate’ the reporters to seemingly random discussions regarding exploding planes and nuclear armament. 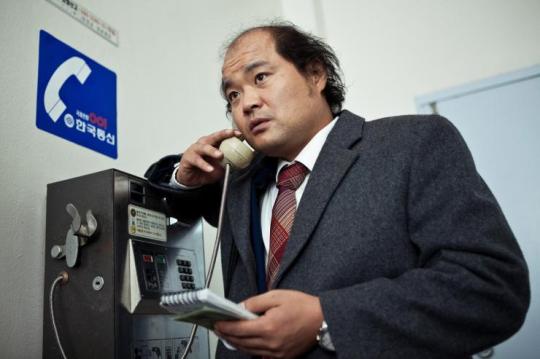 Rival Jin-gi joins the team using his own informants

In terms of character Moby Dick has a highly skilled assortment of actors that are unfortunately never given adequate screen-time or dramatic scenes in which to display their skill. Hwang Jeong-min is noteworthy in this respect as he has little opportunity to perform his talents, as Bang-woo is a shockingly ignorant protagonist who is also very rude and unlikeable. Quite how he isn’t killed by the organisation immediately after emerging as a threat requires genuine suspension of disbelief, although the incompetency of the covert operatives helps in this regard. Instead the violence seems reserved purely for Kim Sang-ho as Son Jin-gi who is beaten and tortured, which appears to be his only function in the narrative. Furthermore Kim Min-hee is incredibly underutilized as Hyo-gwan, conveniently appearing when the screenwriters are in need of someone or something to propel the stalled narrative forward. The same criticism also applies to Jin Goo as Yoon Hyeok who could have functioned as a Jason Bourne figure, yet after his initial purpose of providing classified documents he strangely fades into the background. All the actors do the best they can in such limiting roles, yet the absence of character development and the lack of cohesion between them is detrimental to them all. 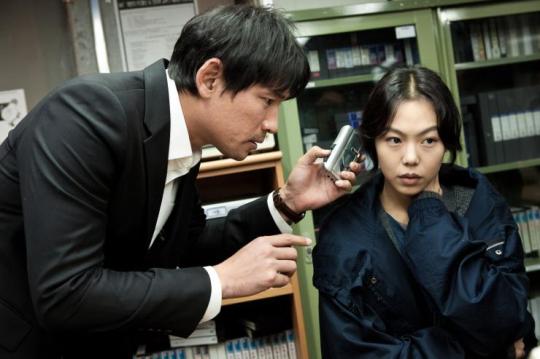 Bang-woo and Hyo-gwan attempts to crack the codes

Moby Dick is a squandered opportunity, with talented actors and a fantastic premise that are let down through a narrative that lacks direction and focus. While it is generally competently directed, there is unfortunately no escaping the narrative inconsistencies, absence of character development, or lack of threat posed by the shadow operatives, all of which require a real leap in the suspension of disbelief in order for Moby Dick to remain plausible – or, for that matter, enjoyable.

For Korean cinema, 2019 was a year that saw the continuation of trends that have been readily apparent for the past several years - an increasing number of big blockbuster/commercially-orientated films with high production values, and the decreasing quality of creative, engaging, and memorable stories. That is not to say the talent has disappeared of... END_OF_DOCUMENT_TOKEN_TO_BE_REPLACED
2018 was quite a bizarre year for Korean cinema. The year began much like any other. The first few months of the year were typically dedicated to family-friendly fare. News of Korean films that were... END_OF_DOCUMENT_TOKEN_TO_BE_REPLACED
While the films released throughout any particular year are indicative of a country's identity, for Korean cinema in 2017 the exploration of political and social issues were especially revealing of the cultural shift that has... END_OF_DOCUMENT_TOKEN_TO_BE_REPLACED

Acclaimed actress Jeon Do-yeon is to be honoured at the 21st Bucheon International Fantastic Film Festival (BiFan) this year, in celebration of her 20 year career that began with Contact back in 1997. Entitled 'Contact, Jeon Do-yeon,' the special program is dedicated to the revered actress and will feature highlights from her incredible filmography, including Secret Sunshine... END_OF_DOCUMENT_TOKEN_TO_BE_REPLACED
Director Kim Jong-Kwan is well-known to fans of independent Korean cinema. A graduate of the Seoul Institute of the Arts, his short film How to Operate a Polaroid... END_OF_DOCUMENT_TOKEN_TO_BE_REPLACED
We are just one week away from the start of the 2nd Korea International Expat Film Festival (KIXFF).  Festival director Kevin Lambert took some time from his busy schedule to answer questions about the festival which... END_OF_DOCUMENT_TOKEN_TO_BE_REPLACED

Having a film selected to premiere at the Cannes Film Festival is an incredible achievement - having two is quite extraordinary. Yet that is precisely what director Hong Sang-soo has done, as The Day After (그 후) and Claire's Camera (클레어의 카메라) are due to be screened, with both films starring actress Kim Min-hee. Selected for the 'In Competition'... END_OF_DOCUMENT_TOKEN_TO_BE_REPLACED
The Villainess (악녀) has received an explosive trailer in the run-up to its debut at the Cannes Film Festival on May 21st. Appearing in the 'Out of Competition - Midnight Projections' program, writer/director Jung Byung-gil's latest... END_OF_DOCUMENT_TOKEN_TO_BE_REPLACED
Director Bong Joon-ho's Okja (옥자) is almost upon us. The highly anticipated science-fiction/drama is set to premiere In Competition at the Cannes Int. Film Festival on May 19th, before appearing on Korean cinema screens around June... END_OF_DOCUMENT_TOKEN_TO_BE_REPLACED