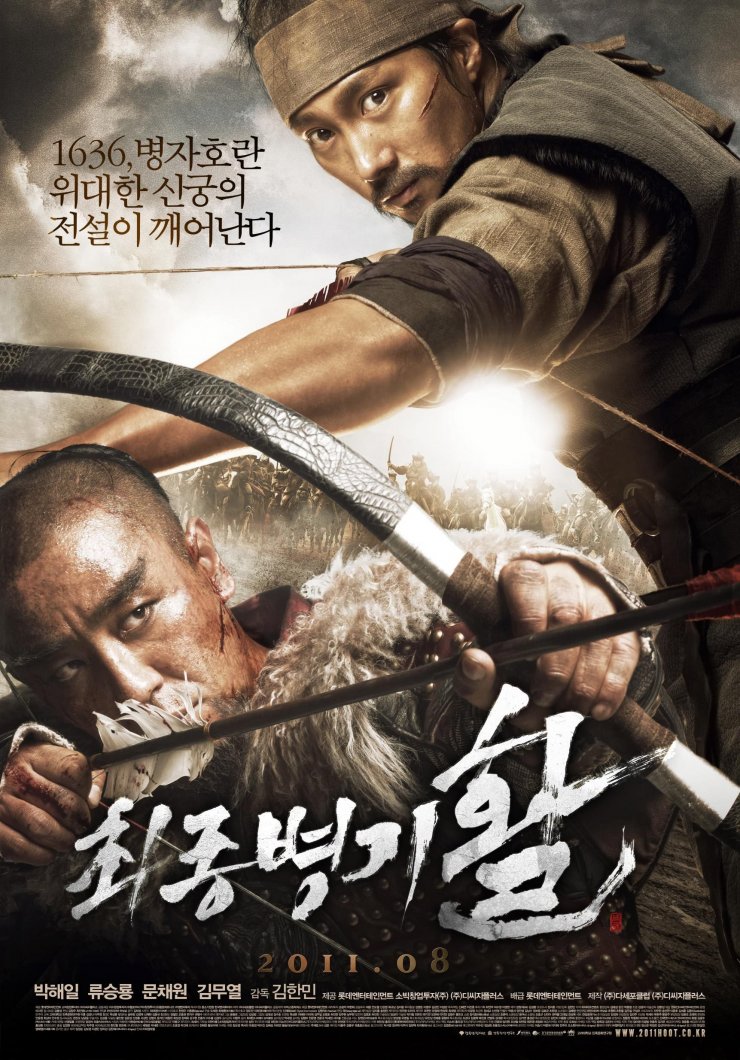 Set in 1636 during the second Manchurian invasion of Korea, Arrow, The Ultimate Weapon (AKA War of the Arrows) (최종병기 활) tells the story of Nam-e (Park Hae-il (박해일) and his sister Ja-in (Moon Chae-won (문채원). Forced to watch their minister father’s brutal assassination, the young Nam-e and Ja-in flee to a neighbouring settlement with their father’s prize weapon – a bow and set of arrows – as their only asset. As they become adults, both brother and sister are hardened to life, but  Nam-e’s bitterness leads to the rejection of others. Ja-in on the other hand wishes to live a regular lifestyle, including marrying her sweetheart Seo-goon (Kim Moo-yeol (김무열).

On the day Ja-in and Seo-goon are to be wed, the settlement is attacked by a Manchurian battalion led by fearsome warrior Jyu Sinta (Ryoo Seung-ryong (류승룡). They slaughter any who resist and abduct the rest, forcing their captives to march north out of Korean territory – including Ja-in and Seo-goon.

Arrow is perhaps best described as Robin Hood meets Apocalypto (2006), as skilled archer Nam-e races against time to track down and save his sister and friends from the invaders. Screenwriter/director Kim Han-min (김한민) does a great job in establishing the characters through not only their childhood trauma, but also with a keen sense of comedy once in adulthood. The tension is palpable when the Manchurians attack during the wedding ceremony as the couple are ripped apart, villagers are butchered, babies are thrown down wells, and idyllic lifestyles are shattered. The first encounter between Nam-e and Jyu Sinta is also incredibly well introduced as the archer organically evolves from an annoyance to a threat. 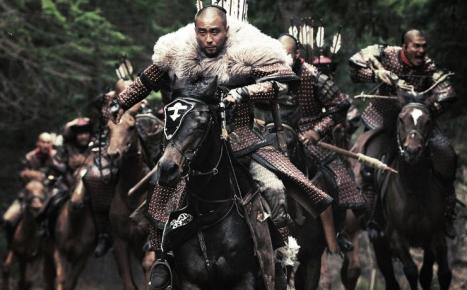 Jyu Sinta and his warriors vow to kill Nam-e

In a film where chasing down the enemy is the focus of the story, Kim Han-min does a masterful job of making each scene as intense and thrilling as possible. The director employs a variety of techniques to this end, using various angles and styles to ramp up the tension to such a degree that the landscape becomes a character itself. As Nam-e comes close to completing his quest, and as the number of enemy soldiers decreases, the director puts a variety of obstacles in their paths that continually keeps the action thrilling and exhilarating. 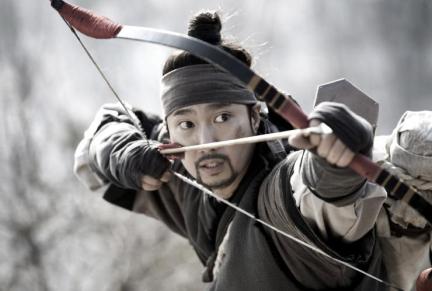 Nam’e fights to save his sister and community

Unbeknownst to Nam-e, the group of abductees are split into two groups. As Nam-e follows the first group, Jyu Sinta’s battalion pursues Nam-e. The first, comprised mostly of males, is sent to a river crossing; the second, consisting mostly of young females, is sent to the Manchurian prince for his pleasure. A strong sense of nationalism arises in Arrow as the captives are tortured and humiliated. At the riverside, friends and allies are murdered for sport by the Manchurian forces. In a final moment of desperation, Seo-goon picks up a sword and fights for his people and proves his years of military service. Joined shortly after by Nam-e, they inspire a rebellion against their captors and destroy the dock, halting the forced immigration. Secondly, Ja-in is selected for the Prince’s pleasure. As he attempts to assault her, Ja-in picks up a sword and fights against her fate, cutting soldiers and the Prince alike. It’s incredibly refreshing to see such a strong female protagonist, as so often women are relegated to the role of ‘pretty-but-poor-and-needs-a-handsome-man.’ While Ja-in still requires saving, her character is established as a powerful woman who will fight to the last to protect her virtue, which by extension also serves as an allegory as the virtue of Korea. Nationalism is also invoked through the constant references to ‘tiger country’ and the presence of tigers as they are Korea’s national animal. 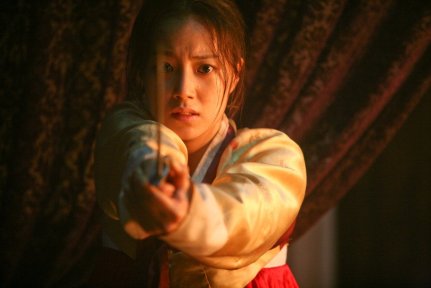 Ja-in fights for her (and Korea’s) virtue

Arrow is an incredibly enjoyable action/adventure film that rises above most other examples of the genre thanks to the ingenuity of director Kim Han-min, who offers refreshing takes on generic conventions. The addition of physical comedy also adds extra enjoyment to the viewing experience. However, Arrow doesn’t quite achieve the level of sophistication that premier examples of the genre, such as The Bourne Ultimatum (2007), provide. This is generally due to the fast paced nature of the film where the protagonists must go from A to B, which stifles character development. The cynical reviewer would no doubt call Arrow a ‘commercial’ film, a label that Kim Han-min openly detests, preferring instead ‘popular’ film. The director is correct – it is indeed popular (the highest grossing film of 2011) and fun, and is well worth watching.

For Korean cinema, 2019 was a year that saw the continuation of trends that have been readily apparent for the past several years - an increasing number of big blockbuster/commercially-orientated films with high production values, and the decreasing quality of creative, engaging, and memorable stories. That is not to say the talent has disappeared of... END_OF_DOCUMENT_TOKEN_TO_BE_REPLACED
2018 was quite a bizarre year for Korean cinema. The year began much like any other. The first few months of the year were typically dedicated to family-friendly fare. News of Korean films that were... END_OF_DOCUMENT_TOKEN_TO_BE_REPLACED
While the films released throughout any particular year are indicative of a country's identity, for Korean cinema in 2017 the exploration of political and social issues were especially revealing of the cultural shift that has... END_OF_DOCUMENT_TOKEN_TO_BE_REPLACED

Acclaimed actress Jeon Do-yeon is to be honoured at the 21st Bucheon International Fantastic Film Festival (BiFan) this year, in celebration of her 20 year career that began with Contact back in 1997. Entitled 'Contact, Jeon Do-yeon,' the special program is dedicated to the revered actress and will feature highlights from her incredible filmography, including Secret Sunshine... END_OF_DOCUMENT_TOKEN_TO_BE_REPLACED
Director Kim Jong-Kwan is well-known to fans of independent Korean cinema. A graduate of the Seoul Institute of the Arts, his short film How to Operate a Polaroid... END_OF_DOCUMENT_TOKEN_TO_BE_REPLACED
We are just one week away from the start of the 2nd Korea International Expat Film Festival (KIXFF).  Festival director Kevin Lambert took some time from his busy schedule to answer questions about the festival which... END_OF_DOCUMENT_TOKEN_TO_BE_REPLACED

Having a film selected to premiere at the Cannes Film Festival is an incredible achievement - having two is quite extraordinary. Yet that is precisely what director Hong Sang-soo has done, as The Day After (그 후) and Claire's Camera (클레어의 카메라) are due to be screened, with both films starring actress Kim Min-hee. Selected for the 'In Competition'... END_OF_DOCUMENT_TOKEN_TO_BE_REPLACED
The Villainess (악녀) has received an explosive trailer in the run-up to its debut at the Cannes Film Festival on May 21st. Appearing in the 'Out of Competition - Midnight Projections' program, writer/director Jung Byung-gil's latest... END_OF_DOCUMENT_TOKEN_TO_BE_REPLACED
Director Bong Joon-ho's Okja (옥자) is almost upon us. The highly anticipated science-fiction/drama is set to premiere In Competition at the Cannes Int. Film Festival on May 19th, before appearing on Korean cinema screens around June... END_OF_DOCUMENT_TOKEN_TO_BE_REPLACED